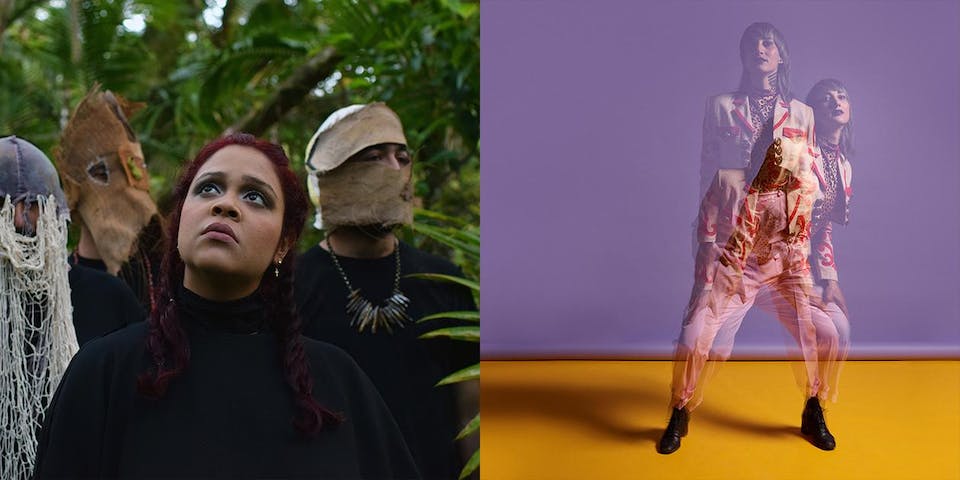 Through her folkloric mystique, otherworldly psychedelia, and a dash of enigmatic punk, Ahomale by Combo Chimbita catapults the sacred knowledge of our forebears into the future. Their second studio album and Anti- Records debut sees the visionary quartet drawing from ancestral mythologies and musical enlightenment to unearth the awareness of Ahomale, the album’s cosmic muse. Comprised of Carolina Oliveros’ mesmeric contralto, illuminating storytelling and fierce guacharaca rhythms, Prince of Queens’ hypnotic synth stabs and grooving bass lines, Niño Lento’s imaginative guitar licks, and Dilemastronauta’s powerful drumming, the lure and lore of Combo Chimbita comes into existence.

The legend begins with their first EP, 2016’s El Corredor del Jaguar, and followed up with the occult psychedelia of Abya Yala. In 2019’s Ahomale, the New York-by-way-of-Colombia troupe fuse the perennial rhythms of the Afro-Latinx diaspora with a modern-day consciousness, while tracing the prophetic traditions of our ancestry. “The more we’ve played music together, the more we began to discover things within ourselves that we were previously unaware of, almost like an energy. And that’s being communicated through our music,” explains Prince of Queens in the making of Ahomale.

Inspired by a Yoruba term, Ahomale, meaning adorer of ancestors, Oliveros reveals her quest to connect with ancestral cosmology, which the Combo pays homage to. “Ahomale resurges from the visions that we’ve been having via our music and life, and the lyrics reflect a manifestation passed on through our ancestors and the gods,” she explains. “I wanted the album to convey the search for spiritual awareness, which ultimately serves as a revelation.” In a similar spirit, Niño Lento conveys: “The protagonist of this album whose name is Ahomale possesses the ability to communicate ancestral wisdom through the music.”

With the help of producer Daniel Schlett (The War on Drugs, Modest Mouse), the group’s rootsy experimental alchemy and metal strangeness take centerfold. Oliveros howls, yowls and chirps with gut-wrenching emotion, like on the languid mirage of “El Camino,” or plaintive frenzy of the title track. Whether rock raw and soulful or bewitching like a shaman in a spiritual ceremony, her voice is always a multifaceted wonder. “Brillo Más Que El Oro (La Bala Apuntándome)” boasts alluring vintage synths that seem to time travel through the lush tropics of yore; then, the mood intensifies when its bridge brilliantly crosses into a spellbinding chant sung in unison: “Y si digo que / Que ahora ya lo se” (“And if I say that I now know”). “Testigo” is pure melodic witchcraft in action that strips away wordly façades into something bare and beautiful: “Desde principio a fin, yo siempre di mi verdad” (“from beginning to end, I always gave my truth), the singer vulnerably croons against a whirling guitar and galloping percussions.

Ultimately, Ahomale is a catharsis of divine feminine force helmed by their powerhouse vocalist, laden with the teachings from a bygone era, in tune with the spiritual realm. “Our spirit and energy have passed through multiple generations,” says Prince of Queens. “We might not be open or allowed to explore it because of Western society’s conditions. But the idea is that we are receiving messages from the past, and from our ancestors that each one of us carry.” In nearly 40 minutes of eye-opening thrills and chills, the listener experiences the pedagogy of Ahomale, journeying through her epiphanies and enlightenment. “Ahomale is a warrior, not the sword and shield type, but a woman who is ready to listen to her heart, follow her intuition and connect with her ancestors,” Oliveros avows.—Isabela Raygoza

Y La Bamba has been many things, but at the heart of it is singer-songwriter Luz Elena Mendoza’s inquisitive sense of self. Their fifth record, Mujeres, carries on the Portland-based band’s affinity for spiritual contemplation, but goes a step further in telling a story with a full emotional spectrum. Coming off Ojos Del Sol, one of NPR’s Top 50 Albums of 2016, Mujeres exhibits the scope of Mendoza’s artistic voice like never before. “Soy como soy,” Mendoza says, and that declaration is the bold— even political— statement that positions Mujeres to be Y La Bamba’s most unbridled offering yet.

The record exists in the post-2016 landscape of a national identity crisis, and Mendoza explores what it means to be a Mexican American woman by leading us through places we are afraid to go. Mujeresventures in to the discomfort of the stories we tell ourselves. Those of our past, our futures. We all have these stories somewhere inside of us, but with Y La Bamba, Mendoza forges new narratives from old stories of heritage and family, tracing history while forging modern chicana feminism.

“Music is an extension of everything I have inside. It’s how I emote,” Mendoza says. The raw honesty of Mujeres is in fact the raw honesty of Mendoza. Armed with the emotionality of traditional música mexicana and the storytelling of American folk, Y La Bamba’s artistry is not just their musical ability but Mendoza’s search for unadulterated truth. It is in an ancestral, spiritual journey in which Mendoza comes to terms with the influence and limitations of her upbringing. Mendoza’s experience of childhood summers in the San Joaquin Valley listening to mariachi, of being raised strict Catholic by immigrant parents, of being a woman having to prove herself to the boys, paints strokes of both melancholy and healing on the tracks. “From the way that my family struggles, to the way they shoot the shit… it’s so different from whiteness,” Mendoza says. “It’s a different dimension.”

Y La Bamba exists in the dimension of the Mexican American imagination: somewhere cynical and optimistic at the same time. While there is a celebration of the Mexican creativity that has informed Mendoza’s life, there is a darker side to reconcile with. Where do mujeres fit in to the American story? What are the sins for which we are all guilty? How do different generations interact with the world? How can a culture become visible without tokenization? It is no surprise that in Mujeres, Y La Bamba’s first record with Mendoza at the helm of production, Mendoza contemplates these questions to tell her story. But it is not just Mendoza’s story. Challenging a narrative and dealing with the emotionality of that effort— that is everyone’s story.