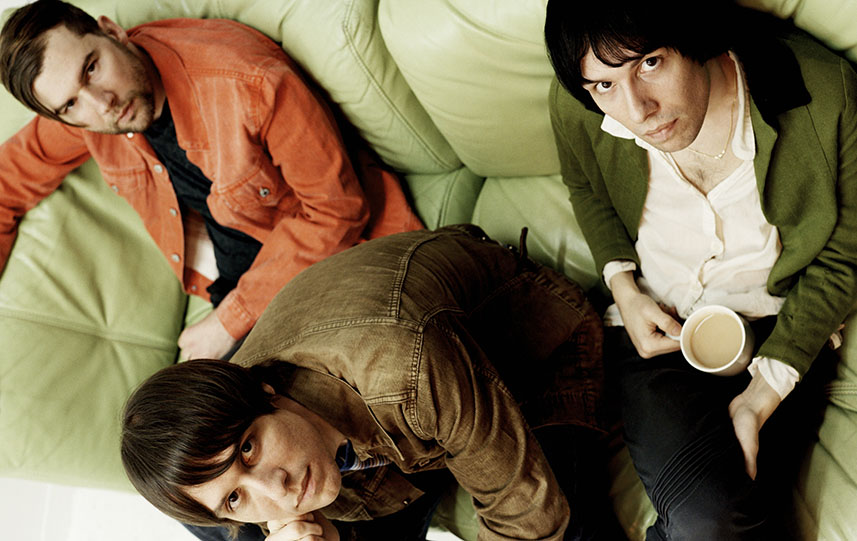 THE CRIBS
There are few things that can threaten to tear a band of brothers apart.

One is having the surname Gallagher. Another is falling foul of the age-old scourge that befell many who came before them: that concussive collision where the irresistible force of the idealistic artist meets the immovable object of the cold, unfeeling music business. And that’s exactly what happened to righteous indie godheads The Cribs, the band made up of Wakefield-born twins Ryan and Gary and their younger brother Ross Jarman, over the most difficult two years in the band’s career.

The band’s struggle was a time bomb that went off just as their Steve Albini-engineered album ’24-7 Rock Star Shit’ hit the shelves in August 2017. That record, the band’s harshest and most abrasive to date, was a ‘surprise’ release that started out as a few tracks recorded at Albini’s Electrical Audio studio in Chicago and eventually grew to a full-length album. It was a gear-change for the band, who decided to release it directly to the fans, with very little advance notice. “We chose that approach so that there would be no pressure on it, because we knew that it wasn’t really a commercial record,” says Ryan.

But beyond the method of release – no press, no radio, no big build-up – the real surprise was how it was lapped up by fans new and old. 24-7 Rock Star Shit placed at Number One in the midweek charts, and landed at Number Eight – the band’s highest chart placing in a run of seven consistently excellent LP’s beginning with their 2004 debut – and their fourth consecutive UK Top 10 album.

However, in what should have been a week of celebration at this against-the-odds success, tension in the Cribs camp was about to reach a head. The decidedly DIY smash-and-grab approach of the album’s launch had exacerbated frictions that ultimately proved irreconcilable and, smack in the middle of release week, the band parted ways with their longtime UK management, who had guided their career since the band’s earliest days. “It blindsided us, and it really took the wind out of our sails,” says Gary. “And now, looking back, that was the start of a whole load of shit.”

In a typically downplayed way, the band have honed in on what’s so special about The Cribs: really bloody good songs. Fans might well think this is their best album in a decade. It marks the first release of the bands new deal under the umbrella of [PIAS], the home of independent music. So, once again all is right in Cribs world – or as much as all is right in any world in 2020 at least.

The Cribs are romantics and they’re realists, and the balance, for a hot minute, nearly tipped in the favour of the latter. But now they return empowered, beholden to no one, on the greatest form and still screaming in suburbia.