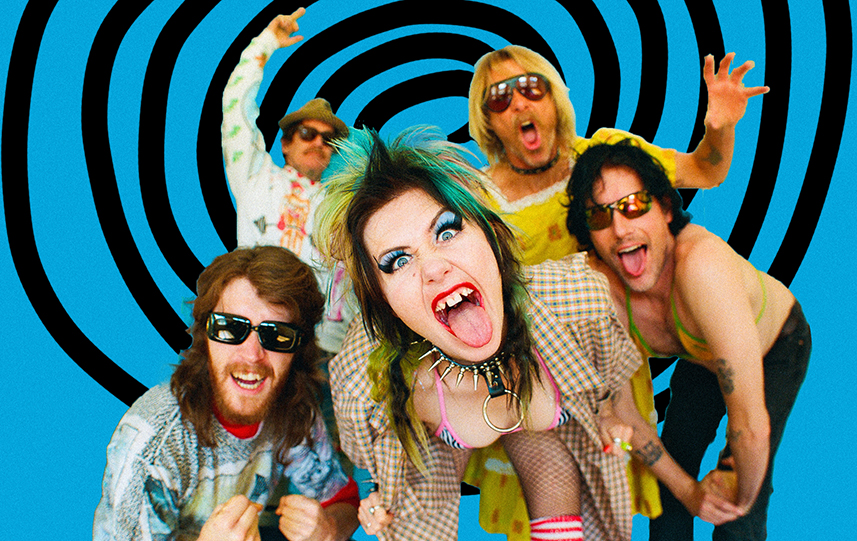 Originally perceived as a Brooklyn based punk band, SURFBORT is proving their cult cool translates coast to coast. Channeling inspiration from the 80’s punk scene to produce rousing, explosive music, their feedback strafed, guitar-shredding music says no to a digital age full of intolerance; they radiate love and friendship. All are welcome in the SURFBORT FREAK FAMILY! Touring with The Black Lips after playing the last Coachella, the band has also performed with The Dickies, Royal Trux, White Fang, The Garden, Martin Rev, Tijuana Panthers, The Mystery Lights, to name a few. The band continues to hail acclaim from peers and journalists alike: “The high degree of authenticity that permeates every aspect of Surfbort’s work makes the band a “distinguishable artistic entity. Live, Surfbort is akin to a stick of dynamite that self-ignites, producing a massive eruption that encapsulates the audience in the most incredible way. The band’s energy feels far from forced; it is raw to the point of being uncontrollably infectious.”- AMPLIPY MAGAZINE. “Machine gun volley of two-minute shards of sound that pummel you into a giddy mess while flicking two fingers to authority” – CRACK MAGAZINE. “The last (only) New York Punk band” – W Magazine. The Guardian compares the band with “The Spirit of Bikini Kill, Pussy Galore, Patti Smith and X”. It’s no wonder Surfbort was one of the handpicked collection of great bands originally signed to Cult Records, the indie label founded by Julian Casablancas of The Strokes/The Voidz. Surfbort was recently picked up by Iconic rock producer Linda Perry to be part of her new partnership with streaming giant SOUNDCLOUD, releasing the new album ‘Keep on Truckin’ in October of 2021. “There probably isn’t a single word in the English language that describes this feeling that Surfbort captures on Keep On Truckin’. It’s like smiling with a fat lip or winking with a black eye or laughing with a set of bruised ribs. The spirit of perseverance, finding some semblance of happiness after taking a mental/spiritual/literal beating. This theme throughout Keep On Truckin’: from the album’s title to “Life’s A Joke” (“Nothing’s going my way today, but it’s okay”) to the closer, “Cheap Glue,” a mid-tempo song that sees Dani vow to do “anything to help you find a solution” to a friend’s broken heart.” – HOLLYWOOD LIFE. The music video for “FML” features comedian and band leader/drummer of Late Night with Seth Meyers, Fred Armisen who walks around doing good deeds all day then transforms into each member of the band saving them from their extreme depression. Pro-skater, Lizzie Armanto makes her directorial debut and co-stars in the music video for “Lot Lizard,” releasing in January 2022 and Tony Hawk is slated to star in the video for “Open Your Eyes.” Singer, Dani Miller also recently guested on the GROUPLOVE track ‘Just What You Want’. Surfbort also starred in the 2019 Pre-Fall GUCCI campaign, performing at the press event and is featured in the FILM DIRECTED BY GLEN LUCHFORD. Singer Dani Miller is also the star of the launch of the worldwide campaign for GUCCI BEAUTY. Drummer, Sean Powell was the inspiration behind the lead Character the Academy award winning film, Sound of Metal.

Slaughterhouse emerged from the South Bay of Los Angeles in late 2017 and hit the ground running with local and out-of-state shows, and an EP that would define their deathrock/punk sound. Solidifying their current lineup by early 2019, Slaughterhouse continues to build their name playing explosive live shows with songs from their recently released debut LP, Fun Factory; out as a split release on Todd Congelliere of F.Y.P’s label Recess Records, and Water Under the Bridge Records. With Veronica Molidor on vocals, Taylor Ramirez on guitar, Eddie Cairns on Bass, and Nick Aguilar on Drums, this group’s first LP is a Fun Factory in itself. It starts with the slow-rolling, powerful track “TV Age,” and continues to roll through with punch in the gut tracks like “Time Killer” and “Paranoia,” as well as Siouxsie and The Banshees influenced tracks like “The Rat” and “Micromanage.” Listening to the album is like a ride on the Tilt-A-Whirl. “Fun Factory is all killer, no filler” – BE IN A BAND, OR DIE. Slaughterhouse’s sound projects a reference to the past while creating nuanced and modern textures with depth well beyond that of a four-piece.

Slaughterhouse has shared stages with the likes of Pennywise, The Adolescents, Dead Kennedys, and Alkaline Trio. In 2022 they’ve toured with Bad Religion, joined The Kills on stage for their anticipated return, and played sold out shows with Amyl & The Sniffers, and Destroy Boys, with no signs of slowing down.

“D0PE CELLAR meets where Nine Inch Nails’ bastard son and G-Funk collide; taking you on a psychedelic journey through the Los Angeles underground; as he paints both a visually powerful, and sonically contagious performance. D0PE CELLAR is one to keep your eyes on.

Intoxication is a must; that is, if you have any controlled substances to take before you watch… Who knows; ask around for D0PE CELLAR yourself. Don’t find yourself missing this performance.”