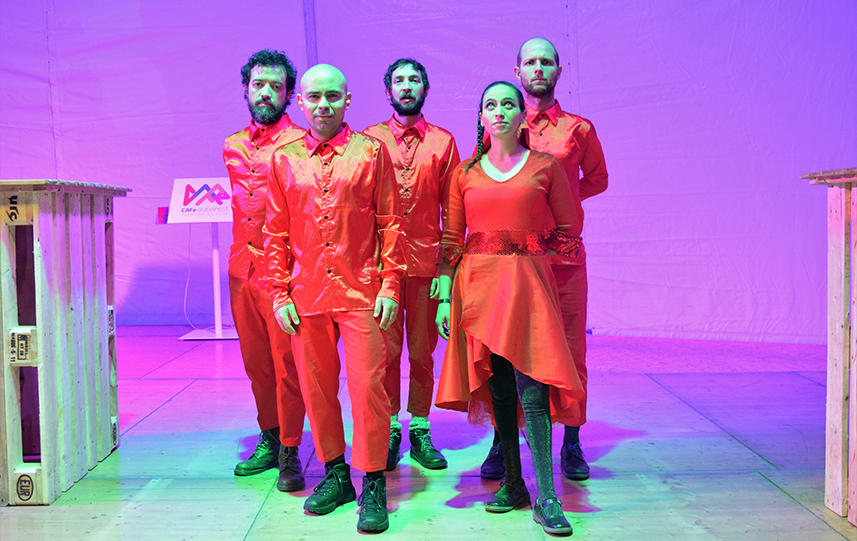 Colombian guitarist and composer Eblis Alvarez started Meridian Brothers back in 1998 as a vehicle for his own experimental music. Over the years, the group has evolved into a five-piece band focused on re-interpreting all manners of Latin Tropical styles with a strong psychedelic and experimental sensibility.

The group has released albums on Soundway records, Names You can Trust, Bongo Joe and now Ansonia and have proved very popular in South America and Europe where the band has toured extensively and has started to reach out to an audience more familiar with indie rock and experimental than Latin music.

Meridian’s new project is a tribute to New York’s 70’s era Salsa Dura. For the project, they have created an avatar, a fictitious group named El Grupo Renacimiento, and written a new repertoire trying to emulate the writing style of those late 60’s and early 70’s groups while retaining the Meridian Brothers idiosyncratic style of arranging and recording. The sound of instruments has been modified to fit the Meridian electronic templates, and the result is a fantastic album true to the spirit of Salsa Dura and in line with Eblis Alvarez two decade-long experiments with Latin tropical sounds.

The album Meridian Brothers y el Grupo Renacimiento was just released on the Ansonia label – a historical Latin label specialized in Puerto Rican, Dominican and Cuban music from the 1950s-1980s that has only recently been revived and has made its catalog finally available on digital platforms.

Meridian Brothers new album will be Ansonia’s first release in over 30 years –  a nod from Ansonia Records to the legacy of Latin music history as it steps into the modern era.

Eblis Alvarez has been an intricate part of the new generation of Colombian musicians for the past ten years. He is also a former member of Frente Cumbiero and a current member of trio Los Pirañas.

Uji is an artist, electronic music producer, ethnomusicologist and ‘timebeing’ from Buenos Aires, Argentina whose trance-inducing creations fuse ancestral and natural soundscapes with the design and aesthetics of our modern times.

Uji’s most recent work, TIMEBEING, explores the creation of new myths and symbolism in: a multi-platform conceptual album (ZZK Records); an 8-part short film (dir. Jazmin Calcarami); an immersive live experience; an NFT collection; and a decentralized collective of artists who acknowledge the need to embrace ritual technology to deepen connection in the physical, virtual and spiritual realms.

His powerful and energetic live performances have taken him on extensive tours around Europe, the US, Asia and Latin America playing prestigious festivals such as ADE in Amsterdam and Mutek Montreal to play alongside top electronic artists such as Sabo, Satori, Mira, Nu, and Hot Since 92. Uji has also released collaborations with artists from all over the world such as Carlos Vives, Nicola Cruz, Petrona Martinez, La Chica, Philippe Cohen Solal and El Buho to name a few.

ZZK grew out of Buenos Aires. Grant C. Dull (pronounced Duel), first came to the Argentine capital in 1999 and reinvented himself more than once, going from musicologist and online magazine editor, to visual artist for events and finally to curator and DJ. He founded the bilingual cultural website WhatsUpBuenosAires.com, and co-founded ZZK Records and Zizek Club with his Argentine partners.  ZZK artists have played more than 200 cities on 5 continents, have penned deals with major labels and their music has been featured on an episode of Breaking Bad and countless other movies, TV shows and ads.

As a DJ Grant has performed as El G in more than 100 cities around the world including stops at Coachella, Roskilde, Berghain in Berlin and the Modern Arts Center in St. Petersburg, Russia.

ZZK Records, the indie label born from a mythical party in Buenos Aires named after a famous philosopher, is turning 15 in 2023.  And for the occasion, we’re throwing a party.

ZZK Records has spent more than a decade at the forefront of Latin music, carving out space for artists putting a futuristic (and often electronic) spin on classic rhythms and folklore traditions. Along the way, the label spread across the globe and helped launch a few stars—Nicola Cruz, Chancha Vía Circuito, La Yegros and Son Rompe Pera among them—but while the name ZZK is now likely familiar to just about anyone with a taste for forward-thinking Latin sounds, the crew’s origins were rooted in something much more humble: the desire to throw a great party.  Full bio.