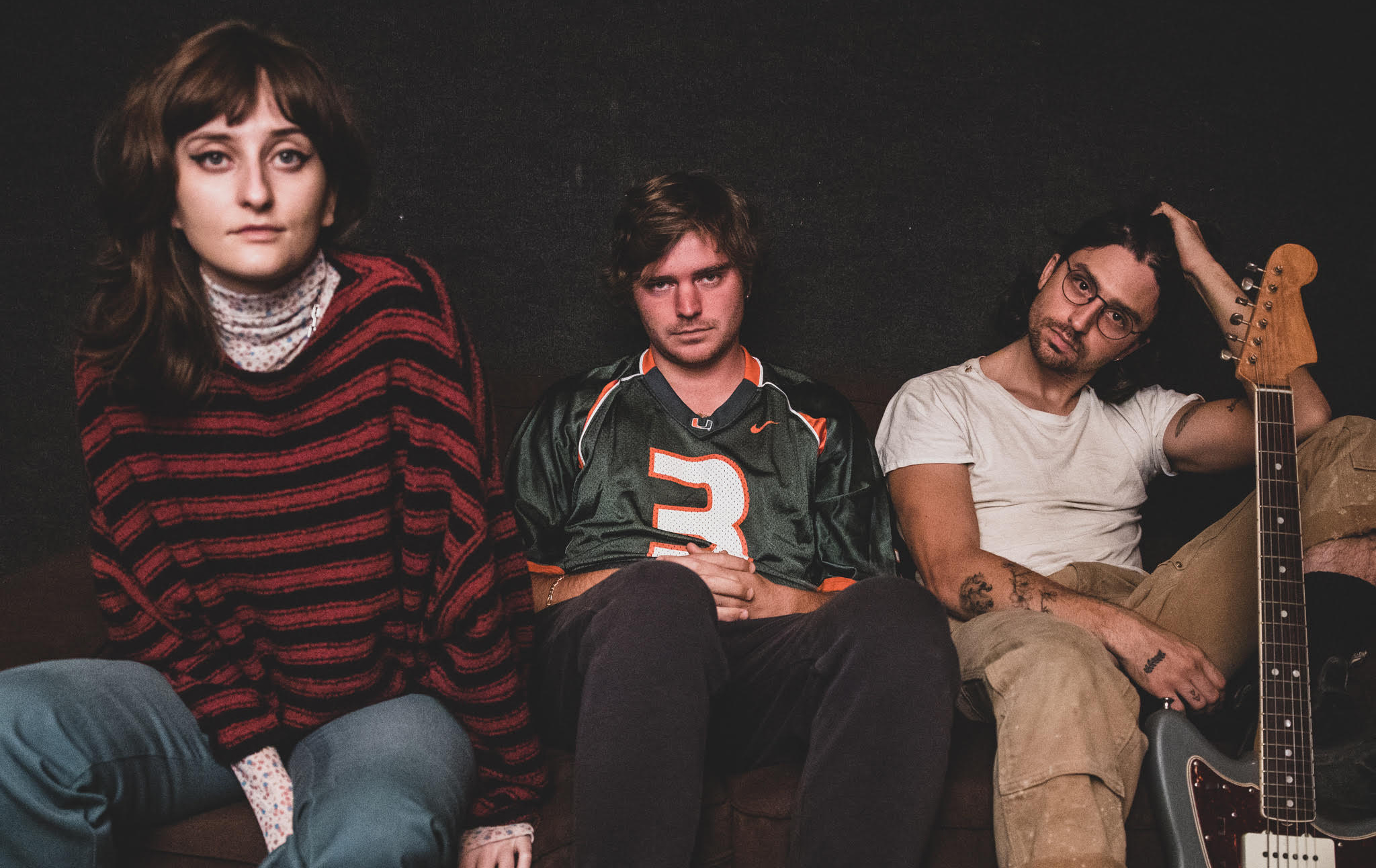 More than any young American rock band, Kills Birds approach their songs with an intensity that’s so tangible it feels like the stakes are near life and death. Fronted by Nina Ljeti, a Bosnian-Canadian filmmaker the Los Angeles Times called “L.A.’s most electrifying new rock singer,” their performances are visceral and cathartic, with guitarist Jacob Loeb’s blistering riffs and Fielder Thomas’ pummeling basslines. While 2019’s Kills Birds was a debut that captured the promise of their grunge-inspired sound and Ljeti’s unflinching lyrics, Married, their follow-up is a triumphant representation of everything that makes them so thrilling. It’s a document of a band pushing their musical chemistry to new heights.

Kills Birds formed in 2017 as a songwriting outlet for Ljeti and Loeb’s budding friendship. While the project started out as a casual collaboration, they truly found a spark when they began writing louder, more emotionally biting material. This dynamic became the core of Kills Birds’ writing process with Loeb interpreting Ljeti’s words into hard-edged compositions. They enlisted Thomas along with drummer Bosh Rothman to round out the group with early songs like “High,” “Ow,” and “Worthy Girl” making up their first full-length Kills Birds.

Their unrelenting songs translated to an electric live show, which garnered loads of local praise like Kim Gordon calling them “hot as fuck.” The LP also found a fan in Dave Grohl. “They’re a younger rock, sort of jagged, new wave punk band, with this amazing lead singer,” he said in 2020, adding that hearing their music brought him back to when he first heard bands like the Jesus Lizard and Dinosaur Jr. “So there is this resurgence of bands who are just kicking ass, and doing it in a weird way that no one has really done it before.” According to Grohl, Kills Birds’ “Volcano” even inspired Foo Fighters’ 2021 single “Cloudspotter.”

With this momentum following a sold-out release show at Los Angeles’ historic Bootleg Theatre, 2020 was supposed to be Kills Birds’ year. But as they were wrapping up a tour supporting punk icons Hot Snakes and driving to SXSW, the COVID-19 pandemic shut down live music for the rest of the year. “Everything was looking really good for us and it all just came crashing down,” said Nina Ljeti. “All of the effort that we put into touring that first record was just gone. We had to sell our van. We had to reevaluate what we were going to do.” Dejected, the band returned home under lockdown. “Before that, we were really at a stride,” said Jacob Loeb. “It was as if we were pulling the arrow back on a bow and when the pandemic hit, the string just broke. It was insanely disorienting. It left us speechless. We needed weeks to pick up the pieces.”

Compounding the disappointment of lost opportunities, this forced period of isolation was particularly draining on the band. “I lived alone and I was single at the time so I didn’t see anybody for the first month and a half,” said Ljeti. “That was like a different kind of loneliness. It was really hard but I learned a lot about myself. You’re healing from past traumas that you had. Also, not having anybody to touch for months at a time with nobody to hug, you almost lose yourself.” Eventually, after weeks of reflection and solitude, the band decided to safely reconvene. “Once we started playing together, and getting in the room, the excitement of the collaboration made everything happen pretty quickly,” said Fielder Thomas. ” We’ve always been very lucky because writing comes pretty seamlessly for us as musicians,” added Ljeti.

Getting together again was the thing that pulled the band out of their pandemic-induced mental and emotional funk, and even songs they had written before had found new life. “Rabbit,” what would become the opening track on Married, shows both Ljeti’s fearless lyrics and the band’s reinvigorated intensity. Written about the experience of being in an abusive relationship with a powerful person, Ljeti sings, “But I’m not like the other girls / How could I let you?/ How could I?.” Throughout, the song violently oscillates between quiet and loud with the raging dynamics of the band disorienting, confrontational, and cathartic. “A new theme in my writing has been addressing some past traumas that can define a person in their young adulthood, and learning how to express that openly without any shame or fear of retribution,” said Ljeti. “It’s taken a long time to feel comfortable speaking about that so I would hope that whoever needs to hear something like this can hear it, take something away from it, and not feel so alone.”

“Natalie,” showcases that Kills Birds is just as capable at writing a memorable hook as they are a brutal soundscape thanks to Thomas’ anchoring bass line. The song is about a lonely friend of Ljeti from high school, and it’s anthemic and evocative, “It’s like those early ideas were put there for our future selves to populate them with this raw emotionality of the experience that we’d had in the months between,” said Loeb. When the band reunited in May, they returned to the material with an intensified focus. “For me, a lot of the things addressed have to do with introspection in the digital age, as well as the hopelessness and loneliness that so many of us felt during COVID,” said Ljeti. “It all came from the intense self-reflection we had to do during that time.”

Dave Grohl invited Kills Birds to record at his Studio 606 in Northridge, California. In September, the band and producer Yves Rothman decamped there for a week and recorded Married on Grohl’s legendary Neve 8028 soundboard, the console from famed studio Sound City which captured albums as iconic as Nirvana’s Nevermind, Fleetwood Mac’s Rumours, Rage Against The Machine, and dozens more. “Just on a technical level, the board is a beautiful sounding instrument,” said Loeb. “I expected that it would elevate our production in a way that we’ve never imagined but what I didn’t expect was like this sense of really emotional history behind it, and the warmth of that studio and the people that work there.”

The songs on Married sound massive, a reflection of Kills Birds’ ferocious live show, soaring arrangements, and remarkably physical drumming from Bosh Rothman. Take “Cough Up Cherries,” which combines austere post-punk basslines with scorching solos and ample distortion, where Ljeti intones, “Us and our stupid brains / Our dramas, anxious pains / Waiting for affectation / Scream out for your attention.” “This ultimate feeling of being in this place, with these people that I’m so insanely close to, after all the stuff we’ve been through: it was just cathartic,” said Thomas. “I remember hearing back one of the songs after a playback for the first time and it was so powerful.” Elsewhere, LP highlight “Glisten” is a slow-burner that highlights Ljeti’s astounding range as a vocalist and compassion as a writer. The song deals with heartbreak and doesn’t soften any blows when it comes to how devastating a partner’s betrayal can be.

For Ljeti, who started making music because of Nirvana, the experience was magical. “If I went back in time and told 17 year old Nina, who’s trying to learn how to sing like Kurt Cobain when she’s visiting her grandparents in Bosnia, that Dave Grohl would love her band and let them record at his studio, she would have died,” she said. “Getting to know Dave too, and learning from him about music, him giving us the opportunity to record there, it’s such a dream come true.” The band describes making Married as a magical time, which included discovering the custom Flying V Loeb used for overdubs once belonged to Motörhead and hearing an unreleased Nirvana demo. “At this most vulnerable moment for our band, where everything felt like it was hanging on a thread, the people that came to our rescue are our heroes and the people we grew up listening to,” said Loeb. “It was this dream surreal scenario.”

But more than any full circle musical moment for the members of Kills Birds, the 11 tracks on Married represent their iron-clad friendship and commitment to the band. “Because we lost so much time with COVID, this record became so crucial, and the weight of it so large, we’re all so devoted to this album, and so fiercely protective of it,” said Ljeti. “It’s a child and you’ll kill before you let anything happen to it. Because of that, it’s very exciting and very stressful. It just means so much to all of us.” They’ve come out of the process stronger, an undeniable force unlike anything in their adopted city.