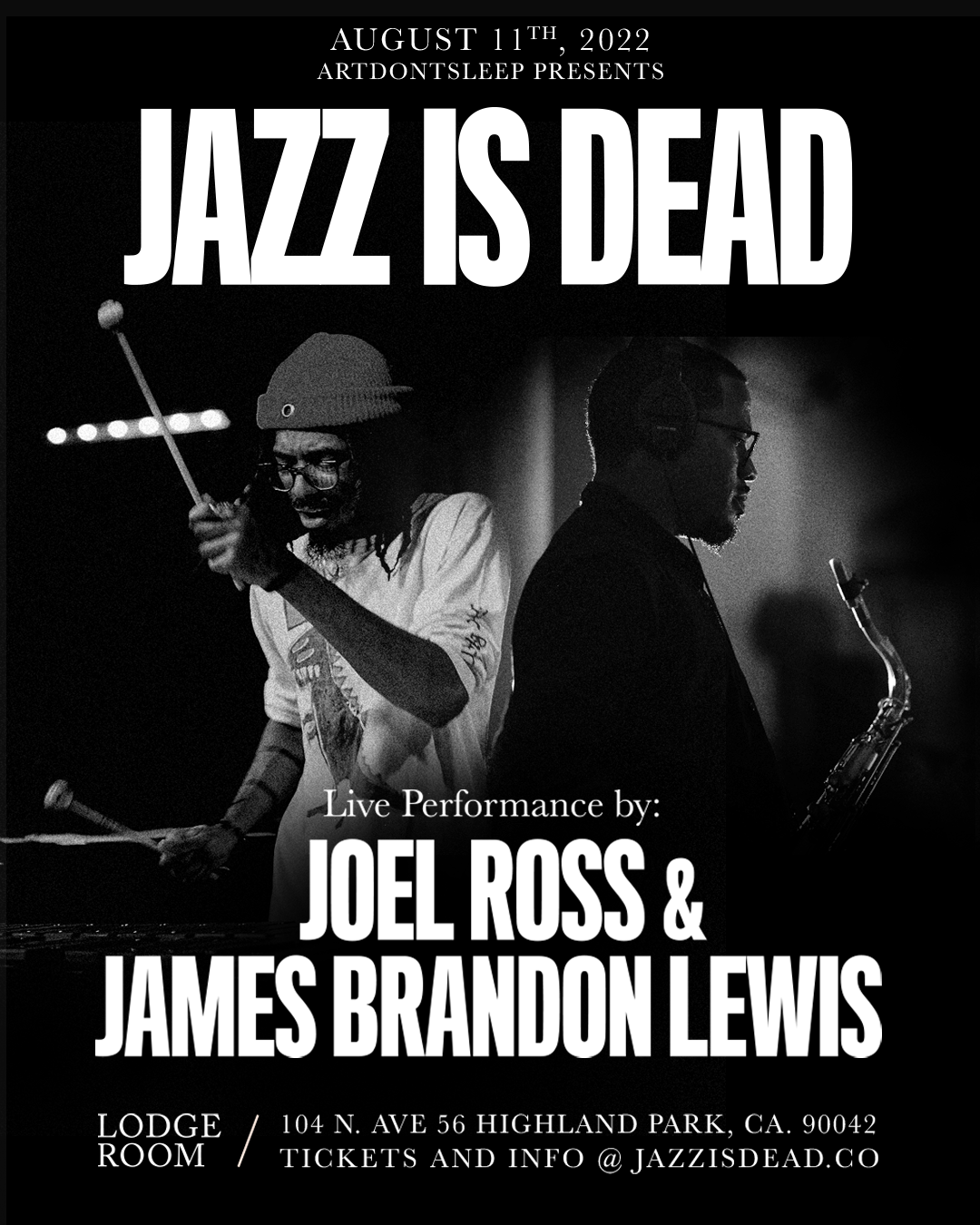 Jazz Is Dead invites you to witness two emerging vanguards of the new sound, as vibraphonist Joel Ross and saxophonist James Brandon Lewis convene on the Lodge Room stage for one night, giving listeners a glimpse into the bright future of Jazz. Both artists are accomplished improvisers and composers, and have swiftly moved up the ranks to become championed by critics and fans alike. If you aren’t already familiar with them, you won’t be able to forget them after this special engagement. The Chicago-born Ross has been playing music since he was a child, banging on a miniature drum set as a child and eventually moving to vibes and becoming one of the city’s most gifted student musicians. By the time he graduated high school, Ross had been featured on stages with the Jazz Institute of Chicago, ChiArts, and the Thelonious Monk Institute of Jazz, not to mention jamming with Herbie Hancock. Since then, praise for Ross’ talent from peers and aficionados has only grown. The Jazz Journalists Association Critics Poll named him Mallett Instrumentalist of the year for both 2020 and 2021, and similar acclaim has been echoed by DownBeat, whose critics poll crowned Ross a rising star on the vibraphone. In the last two years alone, Ross has held down several artistic residencies, most notably the Jazz Gallery All Star Band, which performed live at the Kennedy Center. He has also collaborated with heavyweights such as Brandee Younger, Makaya McCraven, Marquis Hill, Immanuel Wilkins, and many others. Since joining the Blue Note roster several years ago, Ross has produced a flurry of refreshing and exciting projects, featuring his band Good Vibes, as well as larger ensembles. Over the last decade, James Brandon Lewis has asserted himself as one of the preeminent voices of contemporary saxophone. A native of Buffalo, Lewis’ sound is a conduit for far-reaching concepts and inspirations, where the sonic cubism of his mentors Wadada Leo Smith & Charlie Haden paces into a kinetic and oftentimes surreal merger of groove and spontaneity. Since the release of his debut album, 2014’s excellent Divine Travels, Lewis has been a consistent name on the tips of critics’ tongues, having been praised by mainstream outlets such as the New York Times and Rolling Stone and by dedicated Jazz outlets like DownBeat, who named him a rising star on the tenor saxophone in 2020. Lewis has worked with 21st century torchbearers, such as Joshua Redman, Dave Douglas, & Jeff Parker, and his latest band, the Red Lily Quintet, is a cutting edge unit that features lauded peers like bassist William Parker and drummer Chad Taylor. On 2021’s Jesup Wagon, Lewis pays homage to the overlooked creative legacy of George Washington Carver, channeling a balance of urgency and restraint that builds upon the last several decades of free jazz. An unparalleled talent, Lewis continues to push creative boundaries and produce work that is bold and original and part of a greater lineage. To be able to share space with ascendant visionaries of such a high caliber beckons obvious comparisons to historic gatherings like Jazz at Massey Hall. But if ever there was to be such a moment for this generation of Jazz, however, it would surely be incomplete without Joel Ross and James Brandon Lewis.without Joel Ross and James Brandon Lewis.