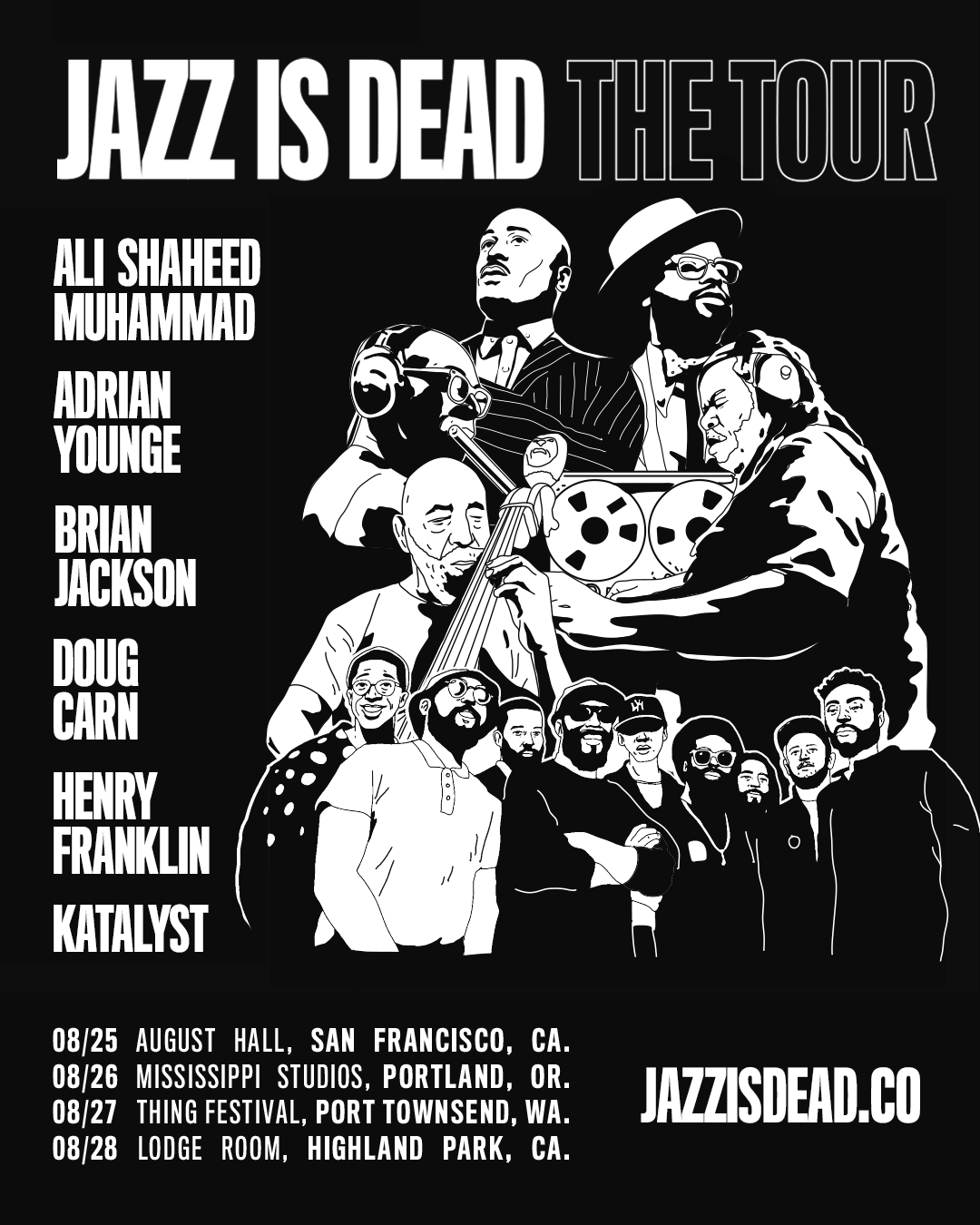 ArtDontSleep is pleased to invite you to attend Jazz Is Dead: The Tour, August 25th – 28th. The Los Angeles label has built a well-deserved reputation since its founding, reintroducing contemporary fans to legendary musicians, all while keeping everything era-accurate and analog. Under the creative direction of Adrian Younge and Ali Shaheed Muhammad, the tour will be visiting select cities this summer, joined by Brian Jackson, Doug Carn, Henry Franklin, and Katalyst. For deep fans and newcomers alike, this is a rare chance for audiences to witness some of the most revered talents who helped take jazz in exciting new directions alongside the two of the masterminds behind Jazz Is Dead.

Multi-instrumentalist and composer Brian Jackson is known to many for his collaborations with poet and musician Gil-Scott Heron. Having met Heron his (Brian) Freshman year of college, the duo appeared on nine albums together, including “Pieces of a Man” and “Winter in America”. Jackson’s work behind the keys on tracks such as “The Bottle” became the natural backdrop for Heron’s poetry. Throughout the 1980s, Jackson collaborated with major stars, such as Kool and the Gang, Roy Ayers, Earth, Wind & Fire, and Stevie Wonder. Today, Jackson’s arrangements are lauded as crucial in the formation of Hip-Hop, Neo-Soul and Jazz-Funk, and their message continues to be relevant to this day.

At the heart of many of the classic titles released by Black Jazz records lay the ruminative, kinetic bass lines of Henry “The Skipper” Franklin. After spending time recording and touring with Hugh Masekela and appearing on his hit record “Grazing In The Grass”, Franklin would go on to release several albums and appear with many of his labelmates, including Doug Carn, Calvin Keys, & Gene Russell. He has previously recorded and toured with the likes of Stevie Wonder, Bobbi Humphrey, & Woody Shaw.

Like Franklin, Doug Carn is an integral member of the Black Jazz family and continues to carry on its legacy. During his formative years in Florida, Carn became an accomplished organist, so much so that he was offered a record deal before he turned 18. As he grew older, his music became more socially and politically conscious, and he, along with then-wife Jean Carne, moved together to Los Angeles, where they would later meet and appear with Earth, Wind, & Fire, on their first album. Carn’s first recording for Black Jazz, “Infant Eyes”, stands as one of the most recognizable titles in the label’s catalog. His mesmerizing organ work can be heard on JID005, and continues to be a reference point for young musicians.

Amongst this cavalcade of veterans is Katalyst. A Los Angeles based collective of nine members, who have individually been active in the Los Angeles jazz scene. They’ve collaborated with major pop stars for close to a decade. Their work looks to the past to inform the future, appearing on records with veterans such as Roy Ayers and new vanguards like Solange. You can hear some members of the group, like drummer Greg Paul, playing on several past Jazz Is Dead albums.