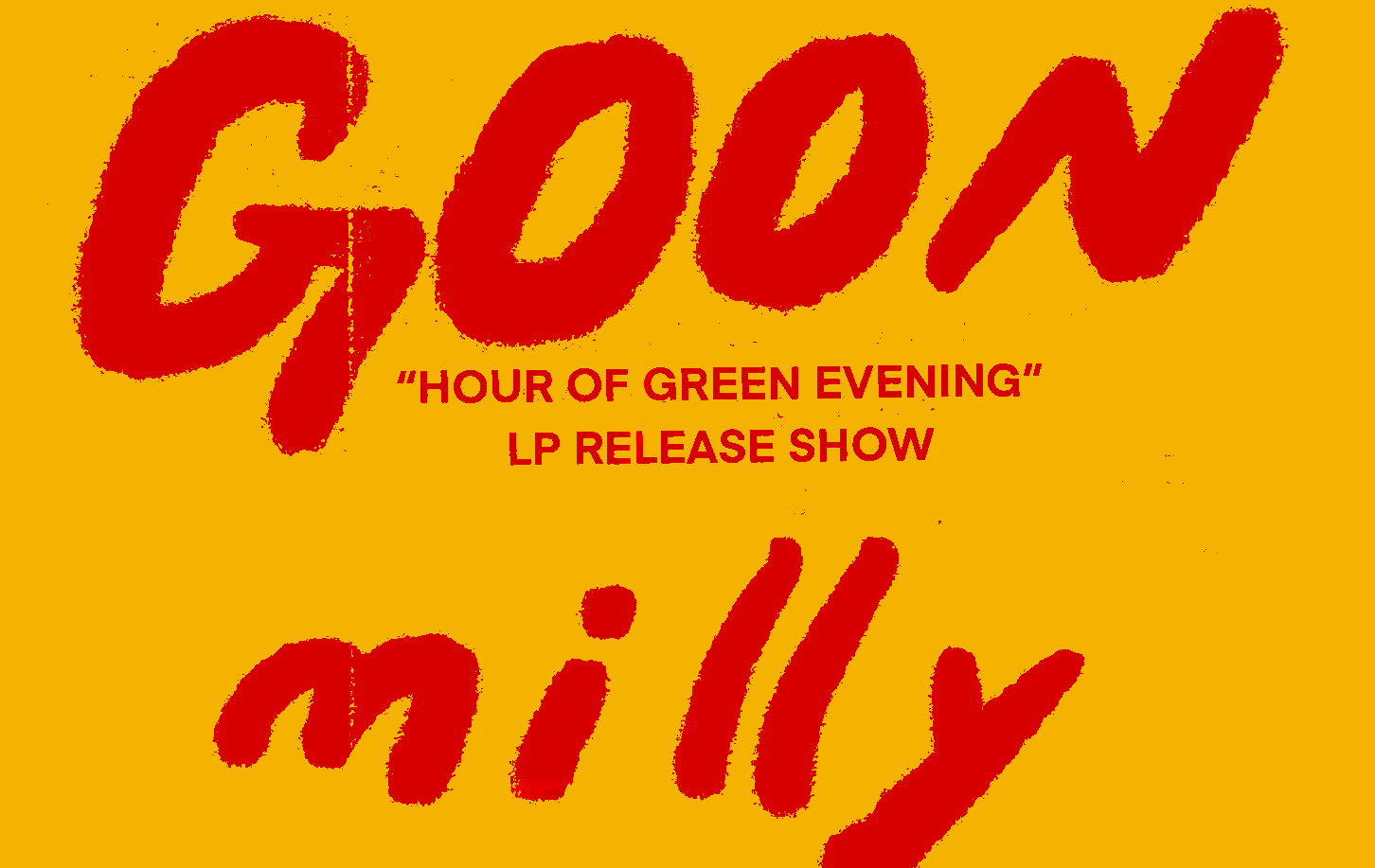 “Come along and wake up on the way,” sings Goon frontman Kenny Becker, “orange shapes arrange and change again/quiet Isaac in a mild dream.” The lyric evokes the hazy dreamscape spaces occupied by the band’s new album, Hour of Green Evening. It describes an in-between time, the pre-dawn quiet over a still-sleeping suburban neighborhood, insects buzzing and the creatures just stirring awake. The yearning of kids in their beds for the world beyond, of being stuck just on the precipice of everything. The sun soon to rise, the whole world about to be in bloom.

Goon began as Becker’s Bandcamp solo project in 2015. At a friend’s encouragement, Becker compiled the best of his tracks and released them as an EP, 2016’s Dusk of Punk. He recruited bandmates from his college buddies and released a second EP, all the while working on the band’s first full-length, 2019’s Heaven is Humming on Partisan Records, followed by the self-released Paint By Numbers 1, a collection of his mid-pandemic home recordings. After several band members departed for other jobs, cities, and life experiences, Becker recruited a new band—Andy Polito on drums, Dillon Peralta on guitar, and Tamara Simons on bass—and set about recording a second LP, Hour of Green Evening, in Tropico Beauty studio in Glendale, California, working with producer and engineer Phil Hartunian. Alex Fischel from Spoon also sat in on the session, providing piano and keyboards.

“We tracked ten days in the studio to start, and ended up working a total of twenty,” says Becker. “For the first six or seven days we did it live, the four of us in the room, with Phil in the control booth, tracking straight to two-inch tape. It was isolated deep pandemic vibes. We felt like we had enough days booked away from the world to really take our time.”

The evolution of Goon has come to full fruition on Hour of Green Evening. It’s the band’s most complete statement, engaging all aspects of their sound to stunning effect. The record conjures the nighttime suburban world of Becker’s youth, a mix of concrete and cookie-cutter homes with the lush beauty of California landscapes. The album thrums with mystery, with the half-remembered past hazy as dreams, the mixed sense of comfort and longing for freedom so essential to youth. The world of Hour of Green Evening is lush and strange, populated by people dreaming, sleeping and waking, existing in that in-between space of the nighttime world. Plant references abound, the “hydrangea lawns” of “Last Light On,” the “eucalyptus wall” of “Wavy Maze,” the oleander in the hypnotic “Lyra,” all swirling together in an endless suburban gloaming.

The dew-soaked morning maw of “Angelnumber 1210” blurs the space between waking and dreaming as distorted guitars cut through the atmospherics. “In a past life you softly slept through waking hours” sings Becker, “and in the boughs beams of sound play a welcoming.” It’s the merging of worlds, the divine suggestion of angel numbers leading the earth-bound narrator towards trust, growth, and progress, even across various lives and timelines.

The light, rangy “Ochre” is a deceptively dark song. Again, Becker calls to the imagery of the half-asleep times, singing, “I wandered out of bed/cuz there’s a firing line in my head/and it worked for a minute/opened my evil eye.” The calmness of the music and the ease of Becker’s delivery belies the anxiety at the core of the song, with images of fire, destruction, and pain drifting by, accented by Alex Fischel’s manic piano flourishes.

The quiet, beating heart of the record is “Emily Says.” The title references both the Velvet Underground and Becker’s wife, Emily. Distorted guitars alternately sludge and sparkle while Becker sings his best melody, gliding soft as a bird over the maelstrom, a strange, idiosyncratic take on the traditional love song. “It’s about how falling in love can save your life,” says Becker, “but it doesn’t fix any of your problems. The chaos of life will persist, but it’s a little bit better, because we’re not facing it on our own anymore. We’re together.”

Hour of Green Evening stands as the most powerful statement from Goon yet. Becker and company evoke a sense of childhood yearning in a night-blooming suburban world, a sleepwalker’s journey beneath the orange-glowing streetlights. It’s a record of melodic richness and finely textured production, slipping easily between heavy guitars and glimmering vocals, a fullness that comforts but never overwhelms. The songs have a melancholy to them, but they never succumb to hopelessness, knowing at the heart of the darkest night there is still light, goodness, and maybe even someone else there to help you wander through.

Wish Goes On soundtracks the (re)birth of a band called Milly. It is something new emerging from something old; something old from something older, made new again. In 2019, Milly hit the road with labelmates and fellow fans of fuzz, Swervedriver. At the time, their lineup was rotating consistently as Brendan Dyer, Milly’s principle songwriter, searched for permanence in the form of a live band. It was on this tour that something clicked for Dyer, who recalls the feeling as nothing short of cosmic. He remembers thinking one day, simply, “This is the band,” and so it was. Spencer Light on guitar, Yarden Erez on bass, and Zach CapittiFenton on drums, with Dyer playing guitar and singing the songs.

The dynamic that burst into existence on this tour only deepened in the following months. “So much of it for me are those in-between moments,” Dyer says about the band’s blossoming friendships, “driving in the car listening to music, or being on break from rehearsal getting something to eat from Lassens.” Dyer would bring sketches of songs to the group, most of which he’d already been developing for years. “This release marks the transition from Milly as a solo project to Milly as something more unified,” Dyer explains. CapittiFenton, Erez, and Light were invited to dissect and rework his demos, a process that continued right up until the time they found themselves in rural Colorado actively recording Wish Goes On with Gleemer’s Corey Coffman. Coffman, who engineered and produced, also became involved in the songwriting process at this point, offering ideas the band would take home and play with before returning to the studio the next day.

The result is five songs which complement one another artfully. By the time Dyer sings, “But it’s different now, feels like the same old town but I know it’s not” on the EP’s second track, “Denial,” it is not only a hometown that has disappeared in change, but also the sordid illusion of US supremacy as it is incessantly propagandized, especially to children — a notion which opener “Star Spangled Banner” openly unsettles. Dyer wrote “Denial” and the three songs that follow at around the same time in his life, with “Star Spangled Banner” coming significantly later, sometime after Milly’s formative tour in 2019. There is something to be said about these conversations across time, the album receding in a sense into the past even as one advances through it. Maybe it has something to do with the idea that longing, wishful thinking, and hope are always reaching both backwards and forwards. Maybe when Dyer sings that he “can’t get past denial,” he’s referring in a sense to the denial of anything but the present moment. Maybe, in the way of Alan Watts, Wish Goes On furthers the idea that “The only way to make sense out of change is to plug into it, move with it, and join the dance.” Dyer describes something to this effect when he says he’s been “trying to keep my head down and follow my path, knowing things will work out.” In the same conversation, he openly acknowledges that “even if that’s not true, it still feels helpful,” which is to say, of course, “Wish Goes On.”