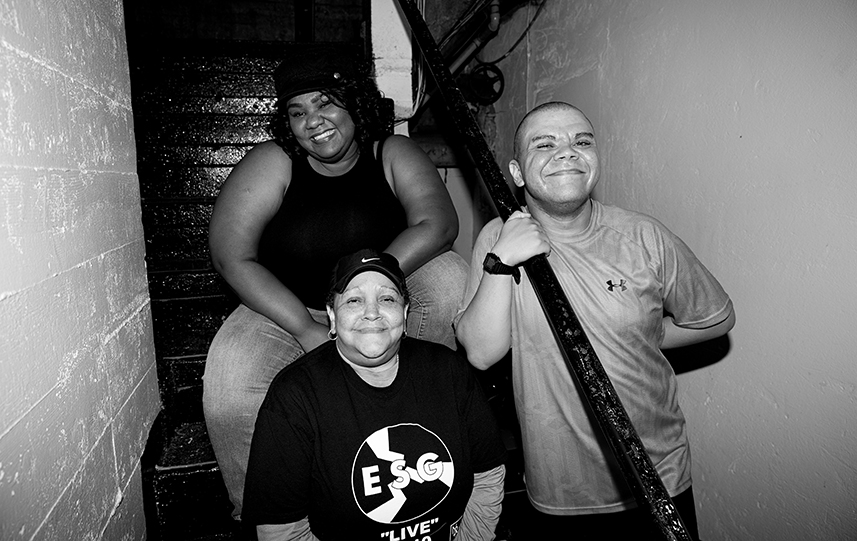 Hailing from the Bronx, ESG were formed at the start of
Hip-Hop. They became the most sampled of groups ever
among their contemporaries such as Public Enemy, LL
Cool J, Marley Marl and Grandmaster Flash. Shortly
afterwards they were adopted by the underground dance
scene. ESG are indeed the only group to play at the
opening night of Manchester’s legendary Hacienda and
the closing nights of New York’s equally legendary
Paradise Garage. Originally recording for Factory Records
in the UK their first album was produced by Martin
Hannett and recorded at the same time as A Certain
Ratio’s classic To Each album. In the US they released
music on New York’s underground 99 Records label
alongside New York’s No Wave groups such as Liquid
Liquid, The Bush Tetras and Konk. In the late 1980s they
released the telling Sample Credits Don’t Pay Our Bills.

Liquid, The Bush Tetras and Konk. In the late 1980s they
released the telling Sample Credits Don’t Pay Our Bills.
ESG have continued to release their own unique music.
Their sparse, raw, percussion led sound continues to
inspire and influence new generations. ESG have
performed internationally to share their creative style
of music.

ESG’s last two albums “Closure” and
“What More Can You Take” are currently available at
their “Live” events. ESG thanks their fans for 44 years of fantastic support.

Cut Chemist has been recording and performing for nearly 30 years. Known as a turntablist, he started his journey into djing at age 11. By the time he was 14 year old, Cut started recording with his friends (including Chali 2na of Jurassic 5) in an inclosed sun patio that his dad converted into a small make-shift recording studio. By age 21, Cut was a founding member of both the rap group Jurassic 5 and the Grammy award winning Latin funk outfit, Ozomatli. His involvement with both groups helped develop a taste for music and rhythms from around the world while keeping his passion for the hip hop tradition. His mix-tapes and remixes became critically acclaimed. His ‘Chemist’ moniker was fully realized with his instrumental, Lesson 6: The Lecture. In the years following, Cut started a series of mix cds with DJ Shadow using all 45s. Brainfreeze, Product Placement and The Hard Sell, the last of which debuted and headlined at the world famous Hollywood Bowl.

Cut’s solo album journey would begin with The Audience is Listening which was released on Warner Bros in 2006. Following his major label stint, he decided to create his own boutique label that would allow him more freedom. Sound Of The Police, Funk Off Mega Mix & his sophomore solo album, Die Cut were his most notable releases. Although these albums may sound very different from one another, they all have a single thing that ties them together – Cut Chemist pushes boundaries on all of them, testing our musical palates while introducing us to obscure musical finds.