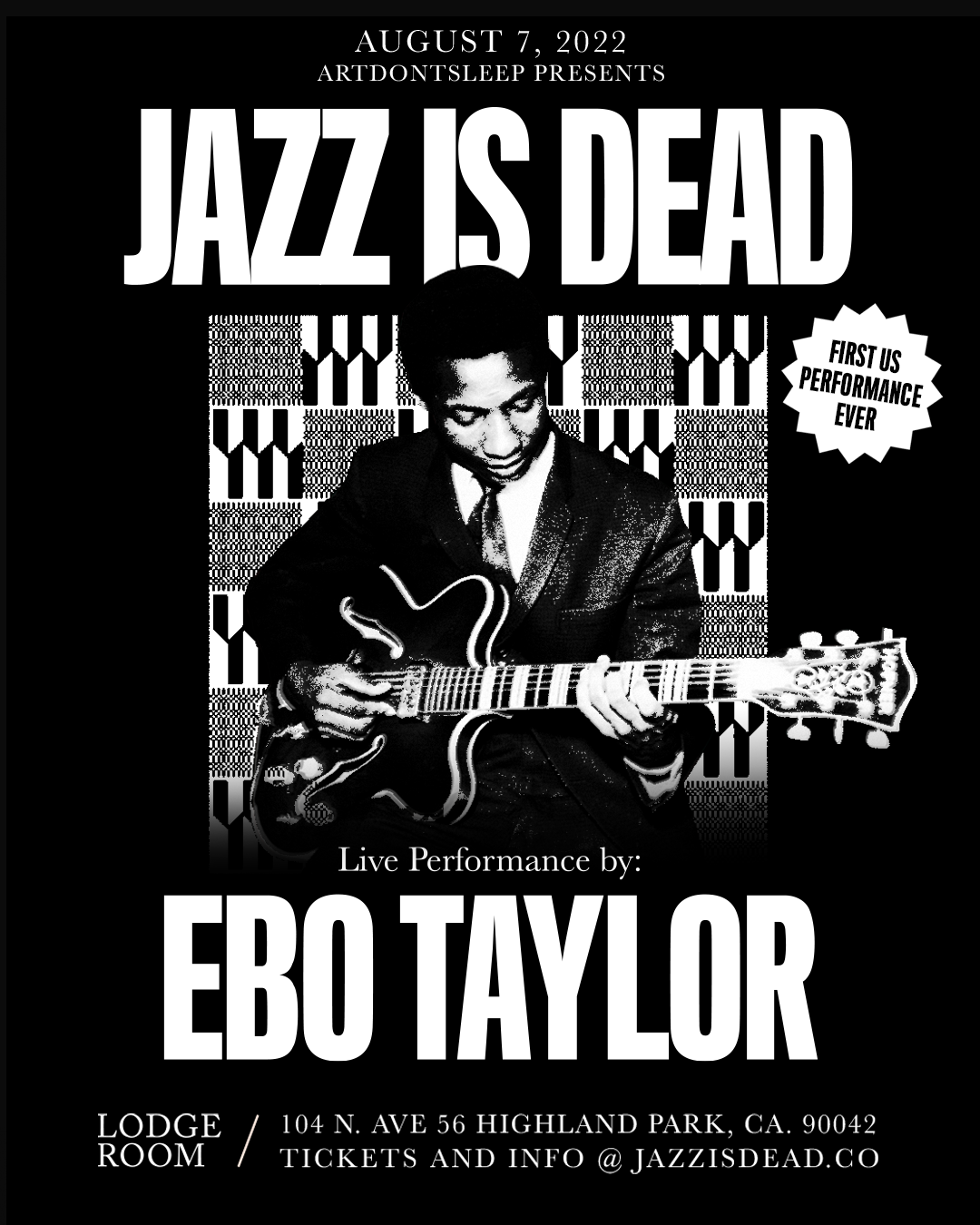 Is with the greatest happiness and enthusiasm that I write this testimonial letter in support of the visa application of Ebo Taylor, whom Is have known well for over a dozen years. Allow me to say at the start that I am a professor of African and Middle Eastern histories and cultures at the University of California, Irvine, and a professional musician with over 30 years of experience in the US and across Africa, including a Grammy award from 2005 for bringing together African and American artists (Ozomatli, Street Signs). I have also been awarded the prestigious Guggenheim fellowship in 2020 to continue with my work with African musicians. And I have written and produced both radio and film documentaries on African musicians for NPR and PBS. I thus feel I am well qualified to come in on Ebo Taylor’s status as an artist.

I first met Uncle Ebo, as he is respectfully known to the rest of the musical community, drawing my first trip to Ghana in 2010. Although already in the ’70s he had the energy and sharp wit of someone half his age – namely me. I spent several weeks interviewing and playing with him, discussing the history of West African music as well as asking for his opinions and sense of the African origins of some of the most important contemporary music in the US, such as Public Enemy, and James Brown. His music was simply so far and away about any other artist I knew in terms of its sophistication and unique rhythms, melodies and arrangements, and he was such a font of knowledge that needed to be recorded, that I convinced my friends at the most important radio program on African music in the United States, Afropop Worldwide, to allow me to produce a radio documentary on him, which we did together in 2013 (Afropop Worldwide was awarded a distinguished Peabody Award in part for our documentary).

The radio documentary makes clear just how powerful a force Uncle Ebo has been in West African music, and through it world music more broadly. Indeed, two men are primarily responsible for what is arguably the most important musical art form produced in Africa in the last century, Afrobeat. The first is Nigerian saxophonist and singer Fela Kuti, who gave the music its name and was undoubtedly its most famous star, as exemplified by the hit Broadway musical Fela! The second was Uncle Ebo, his dear friend and Ghanaian music legend.

Ebo is not that well known in the United States because he has never toured here, and at crucial moments did not get the international renown achieved by his more flamboyant friend. But in his native Ghana and across Africa, and among aficionados globally of afrofunk and world music more broadly, he is recognized as one of the godfathers of late 20th century African music.

Put simply, there has never been a musician and artist quite like Ebo. As an artist, arranger, musician and producer he’s a combination of James Brown, Nile Rodgers and Quincy Jones: He not only created some of the greatest funk songs ever recorded but as much if not more than that, his genius as an arranger gave the signature sound to high life and afrobeat that was made famous by his one-time London roommate (from when they were both music students, in The early 1960s) Fela. And his funky guitar brought a percussive sound to the rhythm section that didn’t exist before.

His work as an in-house arrangement producer for the Essiebons label, And even before that with classic high life bands like the stargazers and the Broadway dance band he helped define the equivalent of the Motown sound in the US across West Africa. Indeed, Ebo’s work as an arranger is as legendary for African music fans as Nelson Riddle or Billy Mays work was for Frank Sinatra.

But beyond his work as an arranger and session musician, his 1970s albums with singer Pat Thomas created a unique Ghanaian high life sound that was the perfect counterpoint to Fela’s harder Nigerian funk. Albums like Life Stories and Pelikans, Twer Nyame have all been reissued and joined by more recent albums in the last 15 years that brought him international acclaim and regular touring across Europe, as well as creating his own afrobeat academy in Berlin.

What’s more, Ebo is a walking encyclopedia of African music. His age means he has very few years to finally visit the US, a place where he has many fans including musicians and scholars of West African music who are very desirous of learning from him while he is there. Despite his age, he remains as sharp as ever and he remains devoted to mentoring younger musicians and sharing his knowledge of the history and musicology of African music with artists and the wider public alike.

Ebo has won numerous awards including a lifetime achievement awards from the Vodafone Ghana Music awards, the high life music awards, the Ghana Business awards, the music in Africa lifetime achievement awards. His ongoing musical output, as evidenced by his 2018 album Yen Ara, on the 60th anniversary of his work as a professional musician, demonstrate both his legacy and his ongoing capabilities. In particular, his unique and expert blending of both traditional Cape Coast music and his signature high life and funk sound, proves once again that he remains a force for innovation and musical progress as well as conserving tradition in Ghana and Africa more broadly. It is very hard to imagine the rise and immense popularity of afrobeats today, without the pioneering fusions of various Western and African styles that Ebo brought to the world. It’s no wonder then that he has been routinely profiled by the likes of CNN, NPR, and major music magazines and shows.

Let me close by saying that I was lucky enough to perform with Ebo and his band several times in the lead-up to the pandemic, including 2018 in Lagos and 2019 at the music in Africa Festival in Accra. I also have been in touch with him regularly during the pandemic years. I can say without a hint of doubt that he remains strong and vital and his ability to move a crowd as well as that of his highly skilled band, will be quite a treat for American audiences who have never had the chance to see him before.

I therefore close by again urging you to approve his application, and look forward finally to seeing him here in the United States.

Please don’t hesitate to contact me if you have any further questions.