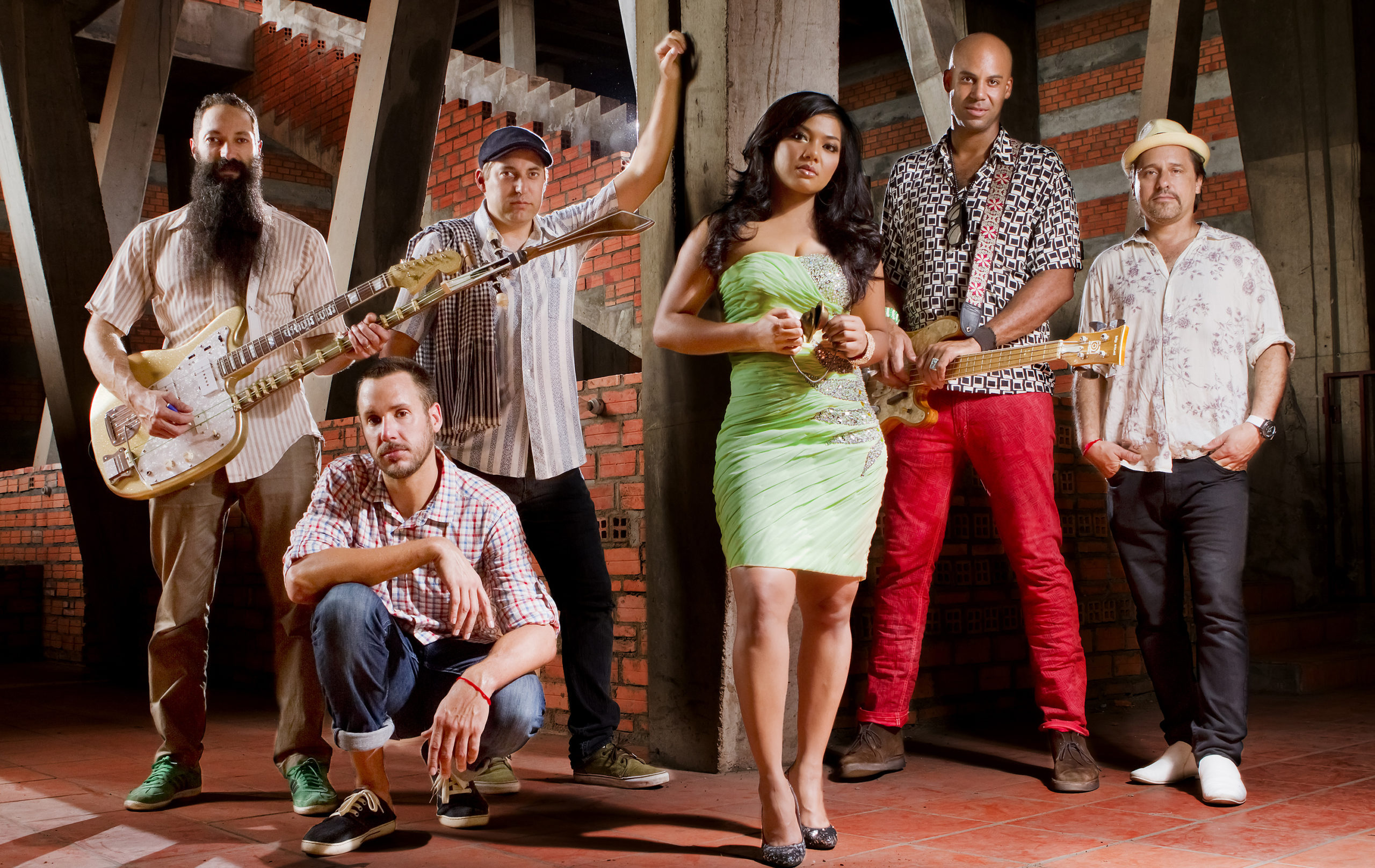 For those trainspotting at home, the Los Angeles based Cambodian and American band DENGUE FEVER (www.denguefevermusic.com) released their first album, (2003’s self-titled debut) with no idea how it would be received. Was Khmer-rock, or the very idea of covering lost classic Cambodian songs, even something that would resonate with music fans? Would anyone in the indie community want to hear songs in Khmer? Would anyone in the world music community want to hear psych or garage rock? More than a decade and four additional releases later, the band is about to embark on their longest tour ever with the equally inspiring Tinariwen, and with more national and international tours coming, the answer to that question is an emphatic YES.

In fact, the reaction to Dengue Fever’s music was so strong in the early 2000s that the band’s sophomore album, 2005’s Escape from Dragon House was an attempt to steady the waves their debut caused by expanding their boundaries writing original material. All the while, they still needed to keep the key elements of their debut intact. Oh, and could you dance to it? Again, an emphatic and resounding “Yes!” from the sweaty bodies and revelry at shows from Europe to Asia, Russia to Brazil, and from the United Arab Emirates to Australia & New Zealand.

Today, partly because of those first two albums, Dengue Fever are recognized for their trademark blend of sixties Cambodian pop and psychedelic rock. Later, albums like Venus on Earth, Cannibal Courtship and the lesser known In The Ley Lines, cemented the band as true global pioneers who are constantly evolving their sound forward. By 2013, with the formation of the band’s own label, Tuk Tuk Records, Dengue Fever began the process of taking control of their legacy as the vast majority of their catalog reverted back to the band. In 2017, Dengue Fever are set to release deluxe edition reissues of their first two albums with bonus tracks, expanded liner notes, upgraded artwork and new packaging. The reissues of their debut release and their sophomore album will be released on March 31 in North America and May 26 for the rest of the world.

DENGUE FEVER’s newly established independence as both label owners and artists marks yet another chapter in the continual evolution of a group unlike many other bands in the Los Angeles music scene. Their eponymous debut was packed chock full of ‘lost’ Khmer covers, the band paid homage to Khmer rock, a hybrid of Vietnam War-era surf, psych and classic rock performed by Cambodian giants like Ros Sereysothea, Pan Ron and Sinn Sisamouth.

The band’s sophomore release (the critically acclaimed sophomore follow-up, Escape from Dragon House) found them writing and performing original material in earnest.  Amazon.com named Dragon House the #1 international release for 2005, and Mojo magazine named it in their Top 10 World Music releases of 2006.

In 2008, their third release Venus on Earth quickly became the band’s best-selling album. It garnered praise from both critics and fans the world over. In fact, Venus found support from iconic musicians such as Peter Gabriel, Metallica’s Kirk Hammett, and Ray Davies, who each made mention of the bands impressive sound in the press.

Their fourth record, In The Ley Lines (2009) was recorded live at Real World Records studios. Packed with reworked titles, a driving live set and an introduction by Peter Gabriel (!), this is likely the least known and least explored in their catalog.

DENGUE FEVER’s most recent album, The Deepest Lake (2015) put the band in the proverbial driver’s seat with no outside entity contributing to the project. This was 100% their project – conceptualizing recording, manufacturing, and releasing it via their own label. Again, the band pushed their boundaries, adding elements of Cambodian hip-hop, Latin grooves and Afro percussion to their familiar sound.

The roots of DENGUE FEVER began in the late 1990’s with a 6-month trek through Southeast Asia by Keyboardist Ethan Holtzman. Returning to Los Angeles with a suitcase crammed full of Cambodian cassette tapes, Holtzman and his brother Zac, who had discovered the same music while working at a record store in San Francisco, reunited. The brothers soon bonded over their love of vintage Cambodian rock and in 2002 founded the band with saxophonist David Ralicke (Beck/Brazzaville), drummer Paul Dreux Smith, and bassist Senon Williams (Radar Brothers). Shortly thereafter the members were on hot pursuit for the ideal Cambodian chanteuse to complete their outfit. After a short period of musical courtship that began at a Cambodian nightclub in Long Beach, CA, Chhom Nimol joined the band when she realized the guys shared a genuine passion for the music and culture of her homeland.

That passion is a cross pollination of Khmer rock, garage rock, psychedelic rock and the British Invasion sound that has pushed the band to heights they could only dream of in 2002. DENGUE FEVER as performed in front of thousands of fans at such noted music festivals as WOMAD (UK, AUS, NZ), WOMEX (Spain), Melbourne Festival (AUS), Glastonbury (UK), Bumerbshoot, (USA), Transmusicales (France), Roskilde (Denmark), Electric Picnic (Ireland), Peace and Love (Sweden), Treasure Island (USA) among many others. Their songs have appeared in films such as City of Ghosts, Jim Jarmusch’s, Broken Flowers, The Hangover 2, the Showtime series, Weeds, the HBO’s hit series True Blood (who named an entire episode after one of their songs) and featured the band’s music, CBS’ series CSI: Las Vegas and numerous independent documentaries.