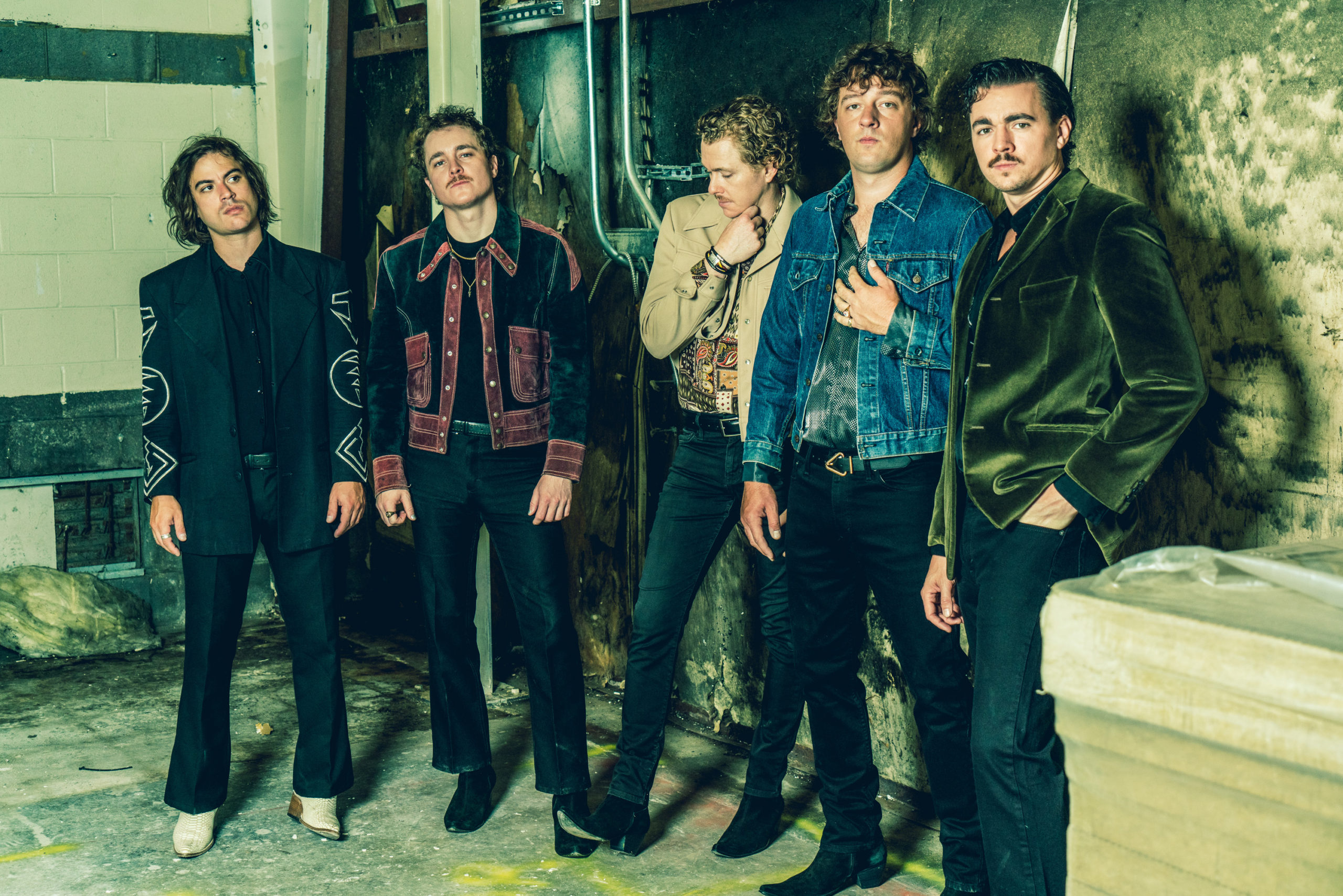 Strutting out of the historic town of Doylestown, Pennsylvania, Ceramic Animal forge an original and exciting new sound from glam, post-punk, psych rock, ’70s pop, and so much more. Just as crucially, this band of brothers–Chris Regan (vocals, guitar), Erik Regan (drums), and Elliott Regan (vocals, keys), along with childhood friend Anthony Marchione (guitar) and Dallas Hosey (vocals, bass)—have found success on their own terms, bucking industry conventions to attract a large and far-flung fan base spanning generations and genres. They’re already a success story based on their first three self-funded, self-produced, and self-released albums.
Their fourth, however, shows the spoils of their success. Recorded with Dan Auerbach at his legendary Easy Eye Sound studio in Nashville, Sweet Unknown is their most mature, their most imaginative, their most daring to date, colliding the glitter-stomp of T. Rex, the rock-and-roll decadence of any-period David Bowie, and the extravagant melodicism of Todd Rundgren. Musically exuberant, these ten new songs are shot through with an undercurrent of sadness, with songs like “Long Day” and “Private Dancer” and even the rip-roaring closer “Valerie” addressing loss, absence, and estrangement. It’s an album that grabs you by the lapels on first listen, but tells you dark secrets with every subsequent spin.
Hailing from Doylestown—rather than coming up in a more established music scene—has allowed Ceramic Animal to figure themselves out as individual musicians and as a band, giving them the opportunity to determine their own musical and business virtues. They played in a series of cover bands throughout high school and college, treating those gigs like an extended apprenticeship with Zeppelin, Hendrix, The Strokes, and The Black Keys. But their first and
greatest influence was always their father. “Our music taste comes from him,” says Chris. “He raised us on classic rock—the Stones, Sabbath, The Kinks. I always make the joke that he was the greatest musician that never was. He couldn’t play, but he had an ear for it. He gave us so much great feedback early on.”
As they grew bold enough to sneak a few originals into their setlists, the lineup for Ceramic Animal settled into a rowdy five-piece, almost always taking the stage in matching suits. “Doylestown turned out to be a very healthy music scene for us,” says Marchione. “So even though we always thought big, we never really felt the need to relocate. We didn’t see the benefit of going somewhere else.” From Doylestown they could make the easy trek down to Philly or over to New York City, and they could do things the way they wanted, without interference from outside parties.
But they never made a conscious decision to keep things ruggedly DIY; instead, they just felt their way in the dark and found that they each had complementary strengths. Chris was responsible for the creative side of the band, writing songs and producing their albums. Erik had a knack for finances and planning, while Elliott (“the best reader among us,” laughs Chris) handled legal. “We didn’t know what we were doing, and we still don’t,” says Erik. “We were able to try things out, and we tried to fail small, fail cheap, and fail fast whenever we could. Then we could regroup and keep going.”

Remarkably, it worked for them. Their records sold well on tour and online, their shows sold out, and their songs found their way onto streaming playlists that introduced them to new fans young and old—teenagers who loved the band’s music and the parents who recognized the band’s influences. Sadly, their father didn’t get to witness their accomplishments: Their greatest influence as well as their biggest fan died shortly before they released their third album.
It was through one of those playlists that Dan Auerbach discovered Ceramic Animal. He delved into their catalog and was impressed by their music as well as their work ethic. “I liked what they had going on, and I liked how obviously hard-working they are,” says Dan. “When I spoke with them, I liked them even more. They’re very down to earth, but they’re also incredibly ambitious. They’re so genuinely confident with themselves, and that allows them the freedom to explore music and ideas together. They have a lot of the qualities I see in very successful groups, but they’re just at the beginning, really.”
He invited the band down to Nashville to write and record their fourth album, Sweet Unknown. Giving up their independence wasn’t easy—after all, they’d come this far by themselves, and they could keep going even further. Auerbach helped them distill their sound and their vision down to its purest form. “It’s not every day that you get this opportunity to work with someone as renowned as Dan,” says Chris. “I was just curious to see what would happen and what we could create together.”
First, Chris came down to write songs with Auerbach and veteran songwriters Desmond Child, Pat McLaughlin, and Angelo Petraglia. They worked on keeping the arrangements clear, focused, impactful. “In the past I’ve written some pretty vague lyrics because I wanted people to be able to read into the songs whatever they wanted or needed,” says Chris. “I learned a lot from that process, especially about how to tell a clear story and how to make the painful edits that make a song so much better. The point is to communicate as clearly as possible.” His storytelling comes through on every song, especially the hand-on-shoulder anthem, “Long Day,” which follows a couple trying to stay together even when the world intrudes: “Looking at the bills laying on the table,” Chris sings. “I would pay them all if I was able to.” It’s a slow burn soul

song, less about any one big moment of betrayal and more about the crushing weight of so many small moments.
Next, the band convened at Easy Eye Sound to turn them into Ceramic Animal songs. With each member bringing the force of his own personality to every note, they emphasized live-wire energy and kept first takes, the better to instill these songs with the urgency and humanity they demanded. For the title track, a subdued ballad with a weightless guitar strum and a call-and-response between vocals and guitars, they wobbled into the studio groggy and maybe a little hung over one morning, then recorded it in one go. That lends the song its last-call world-weariness, as though they’re bringing a long night to a close rather than facing down a new day. “We just wanted to create something that was true to us,” says Chris, “something that we would want to hear, something that we would feel like should exist.”

Lively and imaginative, the music highlights a very real and relatable strain of emotional alienation coursing through the lyrics, creating a world where intimate lovers gradually grow cold toward each other, where people leave you with holes in your life, where flickering memories of brighter times offer the only comfort. It makes for a lonely album, but not one devoid of hope or warmth. In fact, on the standout “Forever Song,” this band of brothers show how music can connect people, if only for a few sweet minutes. As Chris declares right before the chorus, “Strangers dance like soul mates to an old forever song!” You can imagine all their fans, whatever their age, singing along to that big-hearted chorus. “That was something that was really resonating with me when we were working on this record,” says Chris. “Nothing is guaranteed, and sometimes you can only really appreciate the good things in your life after they’re gone. There’s definitely a sense of loneliness that everybody feels.”