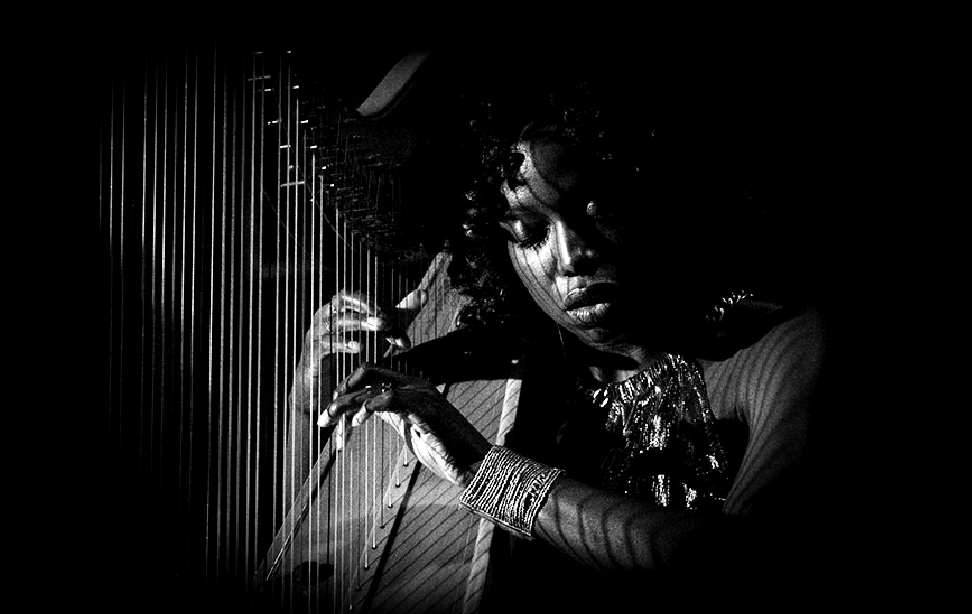 As jazz continues to blossom beyond any rigid limitations, new generations have continued to pave connections from their mentors and the legends that came before them to the contemporary sounds of today. Since making her debut in 2011, harpist Brandee Younger has been a key figure bringing the jazz underground to the attention of the mainstream, studying with Jackie McLean and Slide Hampton and later collaborating with Makaya McCraven, Moses Sumney, Lakecia Benjamin and many others. Her celestial, fluttering harmonies may rightfully draw quick comparisons to notable jazz harpists such as Alice Coltrane and Dorothy Ashby, but Younger has developed a legacy of her own that stands firmly on its own, next to Esperanza Spaulding and Robert Glasper as one of the most crucial jazz musicians of her generation. For one night only, Jazz Is Dead invites you to experience the resplendent glory that is Brandee Younger.

Born and raised in New York, Younger came into the scene after studying with saxophone great Jackie McLean. By the time she had finished school, Younger had played with the trombonist Slide Hampton and become a regular collaborator with the R&B producer Ryan Leslie, appearing on the debut album from R&B star Cassie, as well as Common’s 2007 album, Finding Forever. Her debut release, 2011’s Prelude EP, introduced Younger as a shapeshifter who could reinvigorate established notions of straight-ahead Post-Bop and Spiritual Jazz with a palette of Dub and Soul influences, a precursor to the explosion of UK Jazz artists who drew inspiration from similar sources throughout the 2010s.

Over the course of the decade that followed, Younger could be heard on records with John Legend, Laura Mvula, Robert Glasper, and many others. She joined Ravi Coltrane for a series of concerts tribute to the late great Alice Coltrane, a collaboration that would endure and give way to Coltrane’s appearance on The Brandee Younger Quartet’s Soul Awakening album. In 2020, Younger and her partner and frequent collaborator, the bassist Dezron Douglas, recorded the album Force Majeure from the confines of their apartment amidst the uncertainty of COVID-19. The following year, Younger made her critically acclaimed debut on the same label as Alice Coltrane, Impulse Records, with the highly acclaimed Somewhere Different, fusing expansive Jazz-Funk and Spiritual Jazz with intricate harp textures.

As her profile has steadily risen in the last several years, Younger has appeared with many prominent figures in contemporary Jazz and Soul, including Makaya McCraven, Melanie Charles, Kassa Overall, Badbadnotgood, High Pulp, Durand Jones & the Indications, and more. In addition, she appeared on Kanye West’s DONDA, and Pete Rock’s Petestrumentals 3. A boundless creative who has made vital contributions in breaking down sonic barriers, Brandee Younger has been a longtime influence on much of the contemporary Jazz scene, and is long overdue her flowers. Join Jazz Is Dead in welcoming her to the Lodge Room stage, for what is sure to be an unforgettable night.