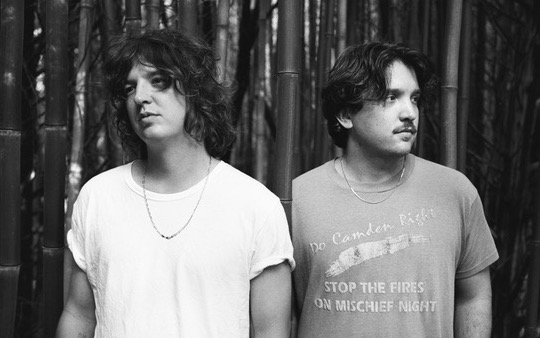 The band’s front man, John Barrett, formed Bass Drum of Death in 2008 as a one-man-band, playing both his bass drum and guitar. The band’s members are from Oxford, Mississippi. The newest release, “Too Cold to Hold” / “Wait” 7-inch, released on Muscle Beach Records, marks the first new music from the group since 2018’s Just Business, and for the first time, it features Bass Drum of Death founder and front man John Barrett collaborating with his younger brother, Jim Barrett. The pair started writing songs in Brooklyn in early 2020 and finished recording in Oxford, Mississippi during the COVID-19 lockdown. A full-length album is also in the works.

Over the past seven years, Kaz Mirblouk, a Los Angeles-based native, has played throughout North America and Europe with his solo project,Hooveriii, Numb•er, and most recently as a touring guitarist with Kills Birds. While attending school in Davis, Mirblouk started performing at local house shows as a two-piece along with Greta Soos on drums. He began touring the summer of 2014 along the west coast with Joey Kaufman. His first EP, Through the Glass, was released in 2015. A year later his first record, Imitate, Intimidate, was also released and he subsequently toured US and Canada. After graduation, Mirblouk moved back to LA. Six Tonnes De Chair released Sidestep as a 7-inch in the summer of 2017. The pair of songs represented a departure from the surf and psych-rock styling of his collegiate releases. The upcoming second record, Careless by Contrast, was written throughout late-2017 and early-2018. Mirblouk enlisted the help of Louis Cohen to help coproduce the record. Experimenting with new styles and genres, Mirblouk and Cohen pushed his songwriting towards maximalism while exploring themes of transition and nostalgia. Between touring internationally in 2018 and 2019, Mirblouk self-recorded the record, featuring friends like Spencer Hoffman, Oliver Pinnel, and other bandmates to create his most refined and layered work to date.

Originally hailing from the Carolina coasts, Heyrocco formed much like your typical band story of three best friends developing their sound and evolving over time. After signing to Vital Music Group out of London in 2014, the band toured the U.S., U.K., & Europe in support of their first album Teenage Movie Soundtrack. They’ve since relocated to Los Angeles, released a few EP’s, and plan to release their next full-length in 2023. The first single “Poison Apple” is set for release October 28 2020.