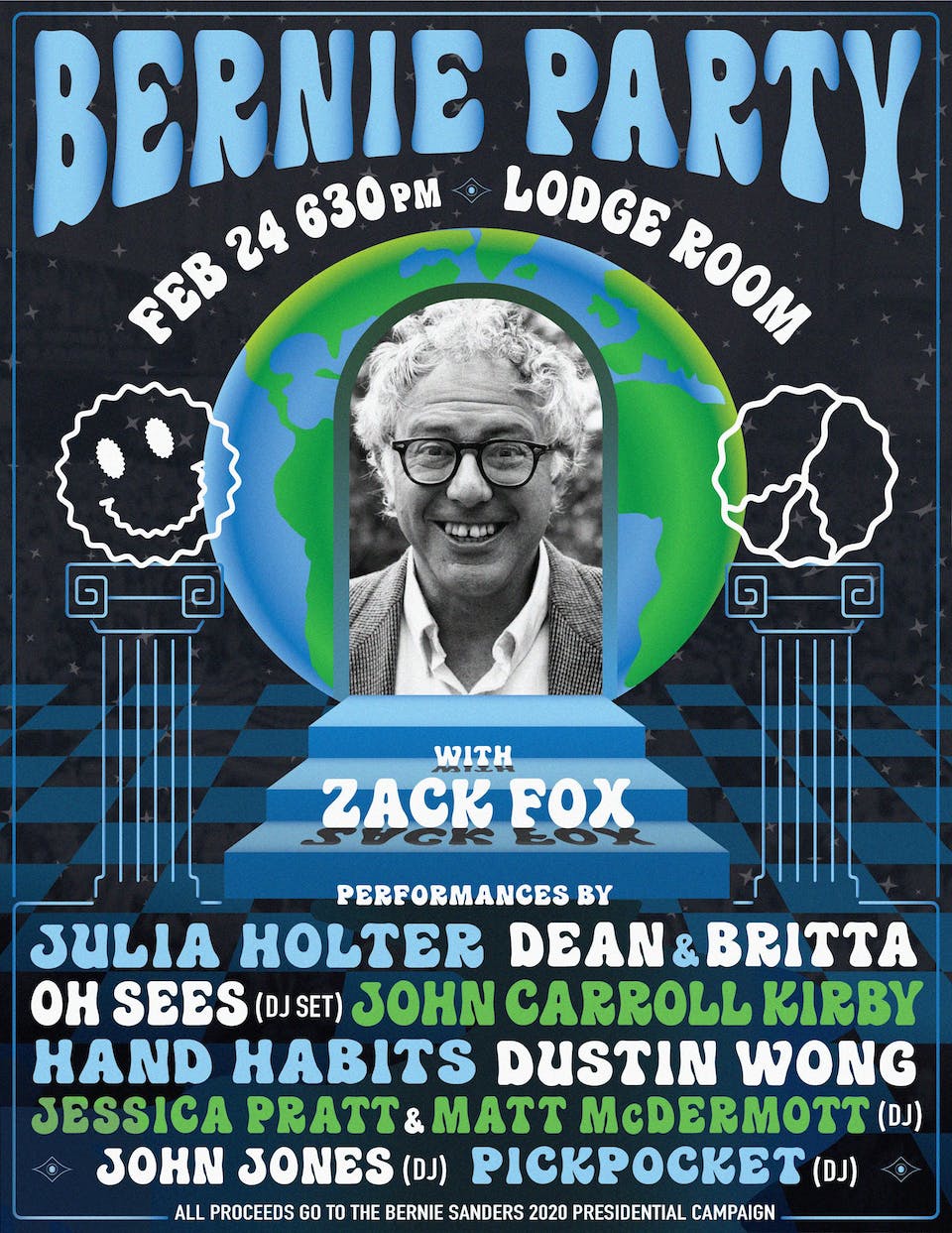 Advance tickets have sold out, but there will be a limited allotment of tickets at the door. Come early to make sure you get in!!

Limited-edition rally signs will be for sale at the event, with all profits going toward Bernie 2020. Learn more about voting in the March 3rd primary here.

Zack Fox is a stand-up comedian, rapper, writer, and illustrator from Atlanta, Georgia. He has collaborated with Kenny Beats, Flying Lotus, and Thundercat.

Los Angeles-based composer Julia Holter has amassed a prolific body of work that explores song structure, atmosphere, minimalism and the authority of her voice.

Dean Wareham and Britta Phillips have a storied catalogue between them—as solo artists, in bands (including Galaxie 500 and Luna), and as duo Dean & Britta. Together they've scored films such as Noah Baumbach's The Squid and the Whale and Mistress America.

John Carroll Kirby is a pianist, producer, and composer, and the go-to collaborator for artists ranging from experimental auteurs Bat for Lashes and Connan Mockasin to pop megastars Harry Styles and Kali Uchis and R&B innovators Solange and Frank Ocean. My Garden, Kirby’s fourth solo album, will be released by Stones Throw on April 24.

After a collection of demos and early studio recordings earned her a small, dedicated audience, Jesica Pratt moved from San Francisco to Los Angeles and recorded On Your Own Love Again (Drag City, 2015), an album that would take her around the world many times over. Her third album, Quiet Signs (Drag City, 2019), has garnered critical acclaim and fans such as Thom Yorke. Matt McDermott is a DJ and journalist with regular posts at Dublab and Resident Advisor. He also accompanies Jessica Pratt at live engagements.

Dustin Wong’s complex arrangements for guitar, voice, and loops explore rhythmic intricacies and a wide timbral palette. In his solo outings as well as his project with Takako Minekawa, Wong continues to best himself in expanding the capacity of what can be done with a few pedals and a guitar.

Meg Duffy grew up in a small town in Upstate New York and cut their teeth as a session guitarist and touring member of Kevin Morby’s band. The Hand Habits project emerged after Meg moved to Los Angeles. Their second album, placeholder, was released by Saddle Creek in 2019.

AV Moves is John Jones, a musician and DJ from Baltimore MD, whose other projects include Geo Rip, Dope Body, and Nerftoss.

From reshaping our immigration system, to creating Medicare for All, to responding to the climate crisis with the urgency it demands: The foundation running beneath Sen. Bernie Sanders’ entire platform is his conviction that the government and economy should work for working people, not corporate elites. Bernie is in first place in recent national polls. Now’s the time to maximize our efforts, put Bernie over the top, and ensure he gets the Democratic nomination so he can go on to defeat Donald Trump. Learn how you can get involved here.